The official book cover for the novel of ‘Morning Glory‘ has been released online with a brand new promotion photo of Rachel. The novel is based on the film’s screenplay wich Rachel is the lead of. You can pre-order the novel, written by Diana Peterfreund, via Random House. The novel will be released October 19th a few weeks before the official release of the movie wich is november 12th in the US. 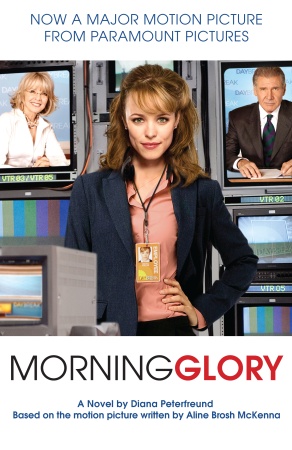 BREAKING NEWS: Ambitious young TV producer Becky Fuller is fired from a local morning show in New Jersey, and her career begins to look as bleak as her hapless love life.

Desperately in need of a job, yet still full of boundless optimism, Becky vows to land on her feet and stumbles into an opportunity at Daybreak, a floundering network morning news program in New York City. Abysmal ratings are only the tip of the iceberg: Executive producers seldom survive beyond the next commercial break, and the outdated cameras belong in the Smithsonian.

Promising the head of the network that she can reverse the downward spiral, Becky makes legendary newscaster Mike Pomeroy an offer he can’t contractually refuse. She successfully adds Pomeroy to the team, but he refuses to participate in any Daybreak fluff pieces and morning show staples like celebrity gossip, weather, fashion, and crafts. What’s more, he takes an instant dislike to his equally difficult co-anchor, Colleen Peck, a former beauty queen.The only bright spot in Becky’s career is Adam Bennett, a gorgeous fellow producer, but Daybreak’s dysfunction spells trouble for their blossoming relationship. As Mike and Colleen’s on-air chemistry proves more explosive every day, Becky must scramble to save her love life, her reputation, her job, and, ultimately, Daybreak itself.