First look at “The Vow”!

Entertainment Weekly gave the first exclusive preview of Rachel and her co-star Channing Tatum in their upcoming movie “The Vow” which wrapped up filming in Toronto and Chicago late last year. The movie is set to release February 10, 2012, so it’s almost a year away but it’s definitely a project to look forward to. We added the scan in our gallery, thanks to @mj_lopez and you can read the article below: 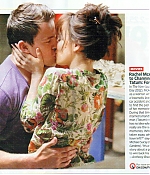 In The Vow (out Valentine’s Day 2012), McAdams stars as a woman who suffers a traumatic brain injury in a car accident and wakes up to find the past five years of her memories erased. During that time, she had married a handsome, loving man (Tatum) – but now she has no idea who he is. “We really are the sum of our memories. When that’s taken away, what do we have left?” says director Michael Sucsy (HBO’s Grey Gardens). “It’s a romantic story about a guy who has to win back his soul mate.”