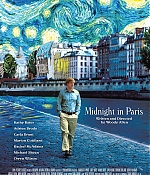 The first official poster for “Midnight in Paris” was just debuted by Yahoo Movies, unfortunately Rachel is not featured but it’s a still of Owen Wilson walking through the streets of Paris in combination of Vincent van Gogh’s “The Starry Night” (Sterrennacht). The poster looks promising! The full poster can be viewed in our gallery. We recently added a short on set video of Rachel and her co-stars in our media archive. Head over to our media archive, and watch the video.

The movie is officially selected as Opening film of Cannes Film Festival 2011 on May 11th and will get a limited New York/Los Angeles release May 20th. Mimi Kennedy recently revealed more information on the plot in an interview. Let’s hope Sony Classics will release the official (teaser) trailer and website soon.