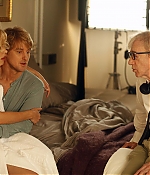 Just came across the first official “Midnight in Paris” behind the scenes production still, via the official Spanish facebook account, with Rachel, Owen Wilson and Woody Allen. We added the still in our gallery, let’s hope more content will be released soon.

Woody Allen recently confirmed in an interview (with a French website) Rachel McAdams will attend Film Festival Cannes 2011 but still isn’t sure about Marion Cotillard and Carla Bruni. Cannes is held from May 11 until May 22 and the film is the opening film so we can expect to see Rachel May 11th. The US release (limited) is May 20th in LA and New York.