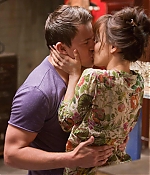 Sony Pictures announced the international release dates for Rachel’s upcoming movie “The Vow” with Channing Tatum, Sam Neill, Scott Speedman and Jessica Lange. The movie will be released February 10th, 2012 in the US and United Kingdom.

The current released are between February 9th, 2012 (Bolivia) until May 16th, 2012 (Belgium). Sony Pictures also put the temporary official website for the movie online and be sure to “Like” the official facebook account if you haven’t. You can find out all the international release dates via this link. The trailer was released a few weeks ago.