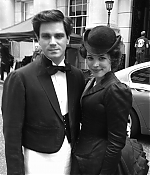 It looks like Rachel did some (re-)shoots for the upcoming “Sherlock Holmes” sequel, “Sherlock Holmes: A Game of Shadows“, in London last Saturday (September 10). We are not sure it were re-shoots or additional scene(s) but an extra posted at her Facebook page: “Rachel McAdams called me pretty today” and later added it was on set of “Sherlock Holmes 2“.

Warner Bros released the first trailer for the movie a few weeks ago, but no sign of Rachel/Irene Adler since she only has a small appearance in the movie. The movie will be released December 16th of this year.

2 Comments on ““Sherlock Holmes: A Game of Shadows” (Re-)Shoots”