This is already our 6th post to celebrate our upcoming 8 year anniversary, only two more to go after this one! I hope you enjoy our previous post, and be sure to read them if you haven’t. We would love to hear your reasons why you are a fan of Rachel!

Be sure to our 6th reason inside/after the jump.

Reason #6: Because she is our favorite cover girl

Rachel graced various cover over the years, and she is definitely our favorite cover girl! She has been on the cover of almost every big magazine including Vogue, Glamour, Instyle, Interview and she even graced the cover of Elle twice. We selected our favorite covers and interviews for this post, because she has the best smile and always an interesting story to tell!

After the release of “The Notebook” (2004) and “Mean Girls” Rachel was quickly named the new ‘it girl‘ by the media. She graced various covers and editorials in 2005 to promote “Wedding Crashers“, “Red Eye” and “The Family Stone“.

“I hadn’t been on a plane till I was 22, and I never really lived anywhere beyond Ontario. My whole life has changed, but you get used to it as it goes.”
–Rachel McAdams, Allure (2005) 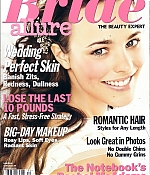 In 2005 Rachel graced two covers of Allure, the normal edition and Allure Bride. The second cover is our favorite of that year. Both covers were shot by photographer Michael Thompson. She was interviewed by Owen Wilson for her interview cover, she would work with him a second time in 2011 on “Midnight in Paris” and also named him her ‘dream co-star‘. Rachel always speak loving and proud her parents:

They’re two of the kindest people I know. They’ve taught me a lot about treating people well, and they’re incredibly honest. They have a real sense of fairness and justice, and they keep me very grounded.

“But as you get older and more successful, you realize it’s pretty lonely at the top. There’s a lot of responsibility. It’s difficult to maintain that..”
–Rachel McAdams, Allure (2005)

Rachel took a break in 2006, because she ‘pretty much worked back-to-back‘ but YorkU, the magazine of York University, did feature her on their cover. She still had to get use to her new found fame:

Celebrity is such a bizarre concept for me. This obsession with a person’s life based on what they project in their art. I really don’t understand that leap. 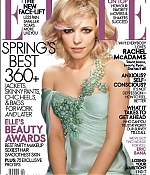 2007 and 2008 were quite years for Rachel. Only two movies, “Married Life” (2007) and “The Lucky Ones” (2008), released. She didn’t do a big promotion tour for them because both movies were more indie type of films. She visited Paris Fashion Week with her sister Kayleen in preparation of her Elle cover and wore couture dresses for her editorial. She reveals she doesn’t make movies, just to make movies:

“I have to be passionate about it. And at the same time, I can get very distracted when I’m working, and I like to get back to my life a lot.”

“When I’m working, the rest of my life slips away. I press pause on everything, and then, when I’m done working, I get back to the world I’m trying to interpret in the movies.”
–Rachel McAdams, New York Times Magazine (2008) 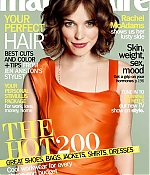 2009 was a busy year with 3 movies, “State of Play“, “The Time Traveler’s Wife” and “Sherlock Holmes“, being released. Rachel graced the cover of Marie Claire U.S. for the first time and was the first ‘celebrity’ who joined their book club. They discussed Prodigal Summer by Barbara Kingsolver. She talked to USA Weekend about what she did during her break:

“I bought a house in Toronto. I spent time there with my family members and friends. I traveled to Europe. I started doing yoga. Actually, I really got into yoga — Kundalini — and love it. I also started a website with friends [greenissexy.org].” 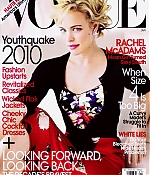 Rachel attended a few fashion shows of Mercedes Benz Fashion week with Vogue editor Anna Wintour in september ’09. She graced the cover of Vogue in january ’10. She also appeared on the cover of Instyle in November to promote “Morning Glory“, fun fact: the same journalist interviewed her in 2005. She thinks it’s possible to have a relationship, even if you have to travel a lot:

“I think if two people are willing to work on it and just accept that it was what it i, then it’s possible. It’s when you’re trying to battle something you just can’t change that it falls.”

“I grew up watching so much television. I was really into soap operas..”
–Rachel McAdams, Vogue (2010)

Rachel was on the cover of Elle magazine for a second time in 2011 to promote “Midnight in Paris“. She opens up about turning roles in certain movies:

“Sometimes I don’t think I’m the best person for the job. That was the case with Morning Glory. Sometimes I think, Really? You see me as this? Just because I don’t see myself that way, does that mean I shouldn’t do it?”

“I’m very silly as a person, but quality silliness on-screen has more of an art to it.”
–Rachel McAdams, Glamour (2011) 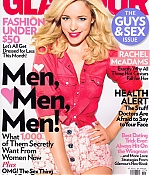 Rachel was on the cover of Glamour magazine U.S. and Stella Magazine UK to promote “The Vow” earlier this year. She reveals that she considers Diane Keaton, with who she co-starred in two movies, as her mentor. For the UK promotion she talked to Stella Magazine and talked about believing in love at first sight:

Filming “About Time” in London begins