Rachel made a surprise appearance during her own St. Thomas’ Timken Centre Wall of Fame Induction yesterday in her former hometown. She was suppose to do voice-overs this week in New York, but the production got pushed back to next week so she was able to attend the event. 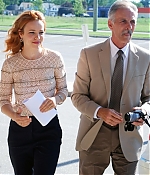 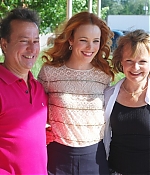 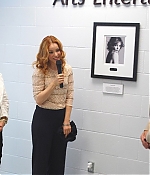 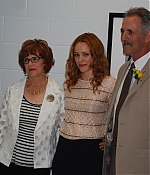 The local news paper St. Thomas Journal released a nice in-depth article about the induction. Rachel confirmed and talked about her upcoming projects “The Little Prince” and the still untitled Cameron Crowe project to the journalists after her acceptance speech. She also revealed she is currently working on a few other projects and there may possibly be a new movie on the way in the very near future.

Linda Maskell Pereira recalls seeing the Canadian actress Rachel McAdams on a stairwell one day when McAdams was nearing the end of high school.

Pereira was McAdams’ drama teacher at Central Elgin Collegiate Institute in the small city of St. Thomas, Ont. and she wanted to know what her student would do after graduation.

McAdams told her she planned to study social sciences at the University of Western Ontario in London, a stone’s throw from St. Thomas.

“I love drama so much but I just don’t think that it would be a very practical thing,” McAdams said, according to Pereira. “I don’t think I can get a job.”

But Pereira told her she should follow her heart and give acting a try.

“The rest is history,” Pereira said. “She went to the guidance office and changed her application.”

McAdams went on to study theatre at York University in Toronto and waded into a career that made her one of Canada’s most famous actors, and a major player in Hollywood.

That kind of fame was something nobody could predict, but Pereira saw loads of potential in her student.

“She stood out as being extremely talented and extremely gifted,” Pereira said. “And she was also a very hard worker and a really smart girl.”

McAdams reconnected with Pereira Thursday in St. Thomas, a city of about 36,000, when McAdams made a surprise visit to her hometown.

The actress attended her own induction to the St. Thomas Wall of Fame, thanks to a change in the production schedule for an upcoming animated version of The Little Prince.

McAdams was supposed to do voice-overs for the project this week but the work got pushed to next week, she told reporters.

“I’ve got the week off, and I was really happy to be able to come here and accept the honour in person,” she said.

“There (at the Oscars) it’s just sort of a sea of faces,” McAdams told reporters after her speech. “You know all the people from TV or film, but these are the people who – you know, I really care what their opinion is.”

McAdams said she felt pressure to convey to her parents, Lance and Sandra, how much they provided for her.

After her work on The Little Prince, McAdams is slated to shoot an as-yet-untitled Cameron Crowe film in Hawaii this fall.

McAdams wouldn’t reveal many details, but said the film stars Bradley Cooper and Emma Stone, with McAdams in a supporting role.

Music is often an important part of Crowe’s films, and McAdams said they speak about music a lot.

“I’m trying to act cool, like it’s no big deal, but it’s pretty amazing,” she said. “I’m really excited to be working with him.”

McAdams told the crowd at her induction ceremony that St. Thomas was really the only home she knew when she was growing up.

She also credited Pereira and her husband Christopher Pereira – another of McAdams’ former high school teachers – for inspiring her.

“(Christopher) Pereira taught me to love Leonard Cohen and Joni Mitchell,” McAdams told reporters afterward. We did, like, two months on Leonard Cohen. Where does that happen, ever?

“It just goes to show what an impact teachers can have on a kid’s life, and what that can develop into.”

“To The Wonder” Additional Stills