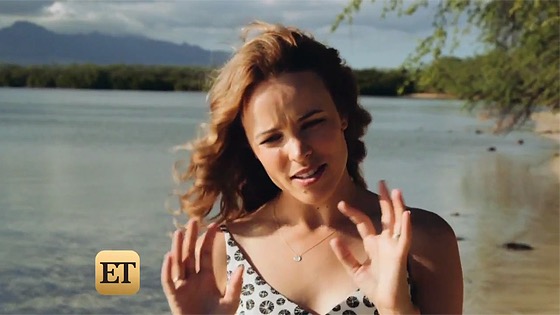 Entertainment Tonight released the first featurette of “Aloha” featuring on set interviews with Rachel and her co-stars Bradley Cooper and Emma Stone. It also features behind the scenes footage of the movie so it’s definitely worth the watch. We have added the Entertainment Tonight segment in our video archive. The movie will be released on May 29, 2015 in the U.S. and September 4, 2015 in the U.K. We hope the promotion for the movie will kick-off soon.

Bradley Cooper and Rachel McAdams play love interests in Cameron Crowe’s Aloha, and just like in the movie, the two have a history.

“I knew that we would have great chemistry,” Cooper told ET. “At least I thought we would based on Wedding Crashers, a movie I’d done with her 10 years ago. I always thought, ‘Wow! It’s so easy to work with her.’ She’s so present and it only got stronger after 10 years.”

If nothing else, the movie gets an A for casting.

Cooper and McAdams lead a star-studded cast that includes Emma Stone, John Krasinski, Alec Baldwin, Danny McBride, Jay Baruchel and Bill Murray in this story of a military contractor (Cooper) who screws up a major deal and is forced to return to his old life in Hawaii to help with a U.S. Space mission.

There, he tries to reconnect with an old flame (McAdams) while at the same time begins to fall for a young, overly enthusiastic Air Force pilot (Stone) assigned to keep an eye on him.

“It’s such a wonderful thing to come to work with Bradley every day, because he has so much passion for not just his character but the whole film — the whole process,” McAdams said. “He approaches every scene like he wants it to be the best scene filmed ever.”

“He is such a wordsmith,” Stone said. “So many of the lines are perfectly crafted. He’s a perfectionist and he will admit to that. And I have a tendency toward that too.”