The first production stills of “Aloha” featuring Rachel have been released and we have them in our gallery. We have also added more additional images of the movie including a very cute on-set photo Cameron Crowe shared of Rachel with Bradley Cooper and Emma Stone. We have also added the magazine scan of the international magazine Fotogramas which features a beautiful still of the movie. The movie will be released on May 29 in the U.S. and September 4 in the U.K. 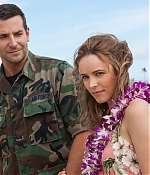 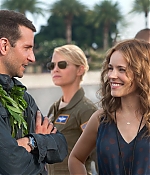 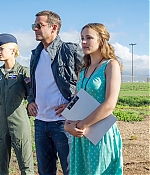 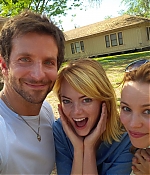 In ALOHA, a celebrated military contractor (Bradley Cooper) returns to the site of his greatest career triumphs – the US Space program in Honolulu, Hawaii – and reconnects with a long-ago love (Rachel McAdams) while unexpectedly falling for the hard-charging Air Force watchdog (Emma Stone) assigned to him. From Academy Award®-winner Cameron Crowe, the writer-director behind such films as Jerry Maguire and Almost Famous, ALOHA also stars Bill Murray, John Krasinski, Danny McBride, and Alec Baldwin.

Be sure to head over to our partner sites Bradley Cooper Source and John Krasinski Web for their coverage on Rachel’s co-stars.