HBO released the official key-art character posters of “True Detective“. It features a close-up of the leads: Colin Farrell as Ray Velcoro, Vince Vaughn as Frank Semyon, Taylor Kitsch as Paul Woodrugh, and Rachel as Ani Bezzerides with the tag line We get the world we deserve. The second season of the series will premiere on Sunday, June 21 on HBO. 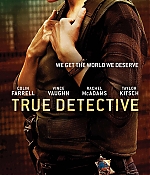 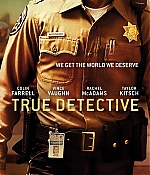 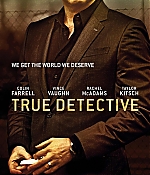 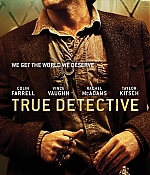 HBO published a Q&A with “True Detective” creator Nic Pizzolatto about the upcoming anticipated second season of the series.

HBO: Earlier last year, you said that this season was about ‘Bad men, hard women and the secret occult history of the U.S. transportation system.’ Is that still true?
It’s not, I’m afraid. There’s definitely bad men and hard women, but no secret occult history of the U.S. transportation system. That was a comment from very early in the process, and something I ended up discarding in favor of closer character work and a more grounded crime story. The complexity of the historical conspiracy first conceived detracted from the characters and their reality, I felt, and those characters are ultimately what have to shape the world and story. So I moved away from that.

HBO: Will this season share the gothic horror sensibilities of season one?
The gothic horror suggested by Louisiana’s coastal landscape didn’t feel appropriate in this place. These new landscapes have their own unique voice and their own unsettling qualities. While there’s nothing occult in this season, I think there’s a disconcerting psychology to this world, and its characters have other kinds of uncanny reality with which to contend.

HBO: What’s that music on the trailer? Where’d it come from?
That’s one of several original songs developed with T-Bone Burnett, as original music plays a much greater role this season. The reasons for that are probably best explained by seeing the show, but these songs will be revealed in full at a later date.

HBO: It sounds like this season removes a lot of the structural qualities viewers identify with season one, like the two-person partner dynamic and the split timelines. Was that a conscious objective or did it grow out of the story being told?
Great question. I think the answer is a bit of both. We were conscious of not wanting to repeat ourselves or remake the same album in a different setting, but I try to be open to whatever structure the story and characters suggest, so I never drew a line through those things. As the characters multiplied and their individual and group complications grew, a more integrated and linear structure worked best. And there was the conviction that if we were to do something entirely new, then we shouldn’t lean on past conceits, but really build from scratch.