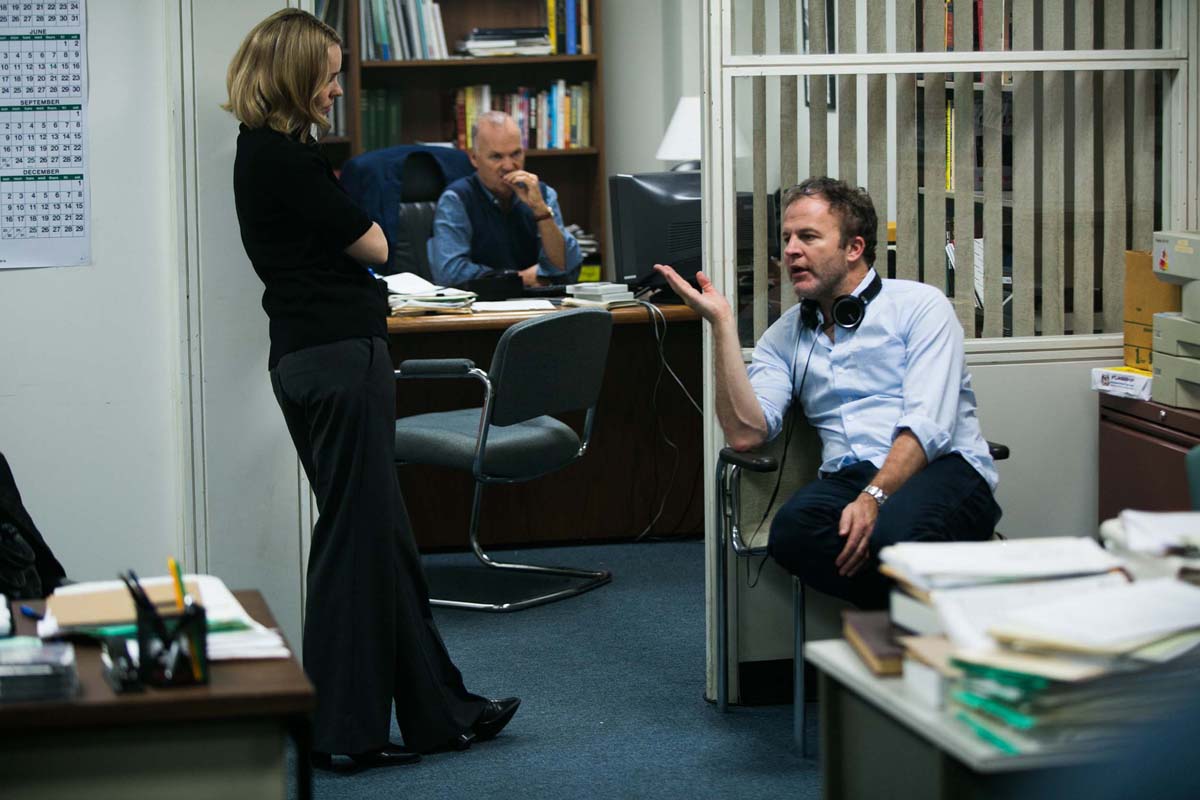 With less than a week until the limited release for “Spotlight” the promotion is officially underway. We will round-up the latest news in this post. The Los Angeles Times released a great interview with writer/director Tom McCarthy on the movie and casting the ensemble. Rachel-centric excerpts can be found below and be sure to read the entire interview at LaTimes.com.

On the cast: “We had the right kind of group, the kind of actors who would want to do this kind of ensemble material. It’s not for everybody. Some actors want to be out front. Keaton, McAdams, Ruffalo have worked long enough to be out front in every movie they do now. They deserve it. But this gave them something else, the chance to be part of a group dynamic and feed off each other.”

On Rachel: “There are two jobs where being a great listener really helps: acting and journalism. And I do think that’s more than just being present. It’s listening for what someone’s really saying, both on the surface and below. Sacha [Pfeiffer, journalist Rachel portrays] presents that curiosity in such a pleasant way, it’s almost easy to miss. And Rachel did a great job of capturing that. It never feels antagonistic, but it’s impossible to avoid. She’s just going to keep coming. She got the victims to tell their stories with specifics that were crucial to the investigation.”

The New York Times also released a great new article on the movie with some great in-sights and a quote by Rachel on the movie:

Ms. McAdams quizzed Sacha Pfeiffer about her sweet tooth and her conversations about the Church with her family. She peppered her with questions like did she wear a watch and how did she stack her Post-it notes. Ms. McAdams also listened to a radio show Ms. Pfeiffer hosted to help capture her fast-talking manner.

On the Toronto set, where most of the film was shot (and many of the journalists frequented at the production’s expense), the Globe newsroom and the Spotlight office were recreated in an abandoned Sears warehouse. “I remember all of them standing in the corner with their eagle eyes on, looking at the desks,” Ms. McAdams said. (Ms. Pfeiffer suggested changing the positions of a telephone and computer, so Ms. McAdams could talk and type at the same time.)

We have added two additional official on-set images of the movie in our gallery. The movie has received critical acclaim so far and currently holds a 97% rating at Rotten Tomatoes (with 36 reviews) and a 81 score at Meta Critics (with 10 reviews). Variety recently included Rachel in their 11 Under-the-Radar Performances that Deserve Oscar Buzz article. The except can be found after the jump. And finally: You can head over to SpotlightMovieTheaters.com to see the selected theaters in which the movie will be playing before going nationwide on November 20 (USA).

Rachel McAdams – Best Supporting Actress, “Spotlight”
There’s a scene in “Spotlight” where McAdams confronts an elderly priest accused of pedophilia by knocking on his door. When he matter-of-factly confesses, she lands every nuance of her newspaper reporter character: the frantic shuffling of notes, the faux-calm line of questioning, the stoic nod intended to mask the sudden rush of adrenaline in her cheeks. “Spotlight” is mostly a male ensemble, but McAdams’ lone female journalist is my favorite performance in the film. After “Mean Girls” and “The Notebook,” this is the comeback for McAdams that Hollywood has been waiting for.