Reminder: “Every Thing Will Be Fine” Out In Selected Theaters & VOD

Home > Gallery Updates > Reminder: “Every Thing Will Be Fine” Out In Selected Theaters & VOD 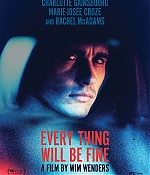 We would like to remind everyone that “Every Thing Will Be Fine” is playing in selected theaters in the U.S. starting today. The movie premiered earlier this year at the Berlinale Film Festival and was also selected for the Toronto International Film Festival. The movie is also available on Video On Demand platforms, including on Itunes. Be sure to head over to GoWatchThis.com to find your preferred platform. The movie is directed by Wim Wenders and is Rachel’s first 3D movie. She co-stars alongside James Franco, Charlotte Gainsbourg, Marie-Josée Croze and Rob Naylor.

This searing drama charts the emotional odyssey of a struggling novelist (James Franco) whose life is turned upside down one wintry night when following a fatal car accident. The incident sets him on a soul-searching, decades-long journey towards redemption, a quest that profoundly touches the lives of both his girlfriend (Rachel McAdams) and the accident victim’s mother (Charlotte Gainsbourg).

The U.S. poster featuring Rachel’s co-star James Franco has been added in our gallery.