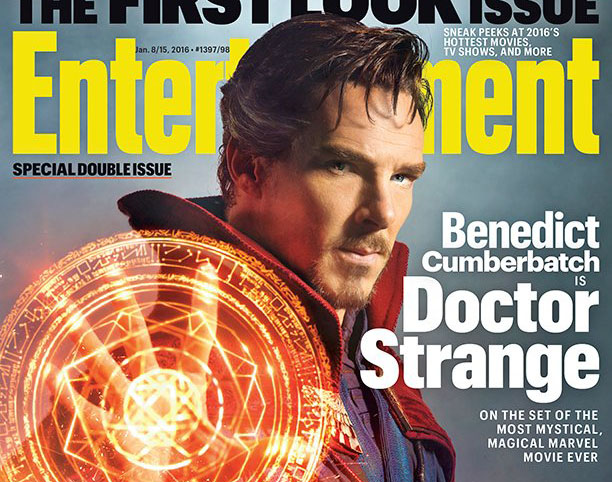 Entertainment Weekly has the first official look at Benedict Cumberbatch as “Doctor Strange” in their upcoming First Look issue, which will hit digital newsstands on December 31. The movie, directed by Scott Derrickson, began principal photography in November of this year and will wrap filming in March 2016. EW has more details about Rachel’s role. The name of the character is yet to be revealed but the nature of the character is revealed.

We know that Benedict Cumberbatch plays the titular surgeon-turned-sorcerer in Marvel’s new superhero movie Doctor Strange (out Nov. 4). We also know that Tilda Swinton portrays a mystic called the Ancient One, that Chiwetel Ejiofor is an associate of the Ancient One called Karl Mordo, and — as EW exclusively revealed — that Mads Mikkelsen has been cast as the movie’s main baddie.

But who is Rachel McAdams playing? That’s a question which has occupied a lot of comic fans ever since it was announced that the star of The Notebook and Spotlight had been cast in the film, and is one we can now answer. Well, sort of.

As is the case with Mikkelsen’s character, the Marvel producers are not releasing the name of the person portrayed by McAdams. But they are happy to give up a little information about the nature of the role.

“Rachel McAdams plays a fellow surgeon that has a history with Strange and is his sort of lynchpin to his old life, once he steps into he role of a sorcerer,” says Kevin Feige, the producer of Doctor Strange and president of Marvel Studios. “She is someone he connects with at the beginning, and reconnects with, and helps anchor his humanity.”

“Rachel McAdams is sort of [Doctor Strange’s] contemporary in the modern-day New York world, before and after he goes on this crazy journey,” elaborates Doctor Strange executive producer Stephen Broussard. “So, she sees him before, she sees him after. She’s kind of this audience point of view.”

Might McAdams’ character also be a love interest for Strange? Let’s see what Cumberbatch has to say on the matter. “I’m not sure if I’m allowed to say what the interest is,” says the actor. “But if I hit on her more than the Ancient One, put it like that.”

EW also released the exclusive first images of the movie. It was previously reported that Rachel is playing Night Nurse Christine Palmer, but it’s still not confirmed.