With a little over a month until the US release of “Doctor Strange“, the promotion has kicked off. We will round-up the latest news in this post. First of all, Marvel & IMAX have announced you are able to see a 15 minutes 3D IMAX preview in theaters. These previews will screen in theaters in the US and Canada and you are able to get your free tickers on SeeItFirst.com. Secondly, we have added the digital Empire magazine (UK) scans in our gallery. The magazine is on newsstands right now, so be sure to pick up your copy! Empire exclusively released a new still of Rachel and Benedict, which we previously added to our site. Thirdly, Marvel has lifted their embargo of the on-set visit from earlier this year in London. Sadly, Rachel wasn’t on set that day – according to producer Feige, she was already 99% done with filming – but the articles thus far give great insight into the movie and filmmaking proces. You can find an overview of the articles released after the jump. 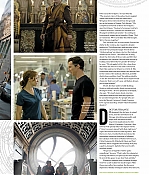 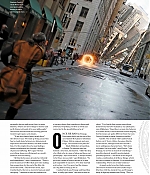 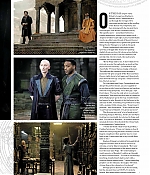 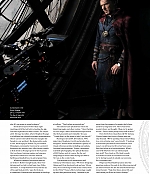 Excerpts on Rachel and her character Christine Palmer can be found below. First up, from Collider’s interview with producer Kevin Feige:

Q: When Rachel McAdams was first involved and announced there was this sort of assumption that if you’re having a female lead in a Doctor Strange movie that it would be Clea. You’ve gone with a much more grounded character. Can you talk about the decision to leave that character for a future adventure?
FEIGE: We wanted a grounded character. We wanted a character that was a connection to Strange’s life in New York City, in the normal world. Somebody that could be his anchor to the real world, to his present in the beginning of the film, and by the time he re-encounters her, wearing that, someone who can comment on his transformation as a character. This cast as you all know is shockingly amazing, and Rachel, who’s finished her role, well, 99% of it – perfect timing so she can spend time at the Academy Awards now, we planned it like that – is great and can bring again a grounded reality to the character of Strange at the beginning of the film, and of course as she encounters some odd and strange and other-wordly when he encounters her late in the movie, you believe it. You believe that her reaction to what she is seeing like, say, an astral form or somebody that she used to know as an arrogant surgeon. Her reaction is funny but you also buy it.

Secondly, another quote from Feige (via Collider’s in-depth set-vist article):

As for why they didn’t introduce Clea, who many assumed McAdams was playing at first, Feige added,”we thought that an interdimensional girlfriend that’s the daughter of an interdimensional demonesque creature was a step too far in introducing this world.”