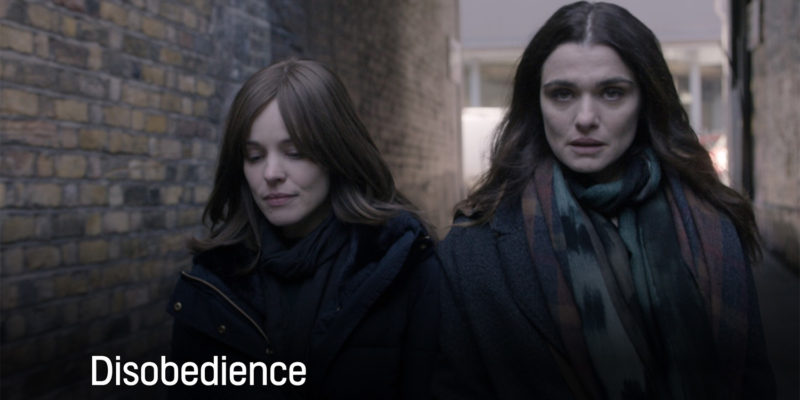 While we are eagerly anticipating the world premiere of “Disobedience” at the 2017 Toronto International Film Festival in September, which was announced earlier this week, we will round-up the latest news on the movie in this post.

• IMDB and Launching Films are reporting Curzon Artificial Eye is expected to release the movie on May 4, 2018 in the UK. It was previously set for March 30. No release date has been set for the USA. Film4 production site confirms the 2018 release for the UK. Earlier this year it was reported that the movie was acquired internationally during the Cannes market but the movie is still without a distributor in the USA. Hopefully it will get picked up during the upcoming fall festival season.

• Film Music Reporter is reporting that Matthew Herbert is set as composter of the movie. Herbert previously worked with director Lelio on “A Fantastic Woman“. Furthermore, Nathan Nugent (Room, Frank) has been set as editor. Additionally, Benuts has announced they finished VFX (visual effects) on the movie.

Matthew Herbert has recently composed the music for the upcoming romantic drama Disobedience. The film is directed by Sebastian Lelio (Gloria, Christmas) and stars Rachel Weisz, Rachel McAdams and Alessandro Nivola. The movie is based on the novel of the same title by Naomi Alderman. Lelio also wrote the screenplay with Rebecca Lenkiewicz (Ida). Frida Torresblanco (Pan’s Labyrinth, Magic Magic) is producing the project for Braven Films, alongside Weisz for HGS Productions and Ed Guiney (Room, The Lobster, Frank) for Element Pictures. Disobedience will premiere in September at the Toronto Film Festival.

• Director Sebastián Lelio has been promoting his other film (“A Fantastic Woman”) and briefly mentioned “Disobedience” in various interviews. Firs up, he described the movie to Paris Match as “a melodrama like Douglas Sirk that tends towards noir.” Secondly, he called Rachel and costar Rachel Weisz “powerful actresses”. Finally, he revealed to Cinespagne.com earlier this month that the movie was in the final stages of post-production and that they had to work relatively fast, presumably in order to finish the movie in time for it’s world premiere at TIFF.

Director Lelio recently shared a photo on his official instagram, which seems to be in the editing room for the movie.