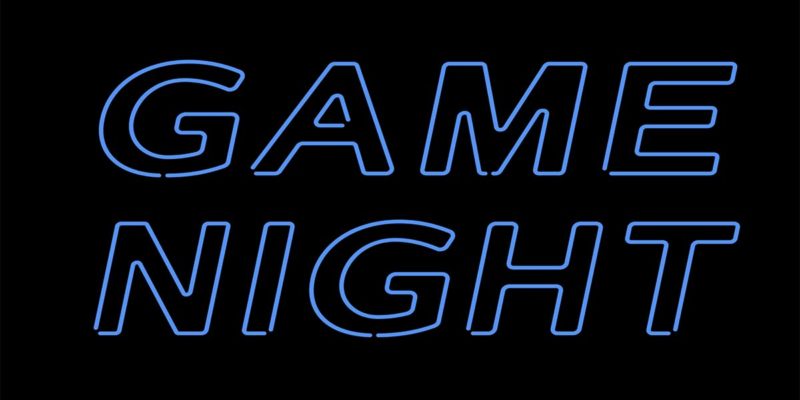 “Game Night” screenwriter Mark Perez did an in-depth interview with the podcast Too Fat Dudez earlier this week and also discussed the movie. He gave some great and interesting insights into the movie and filmmaking process. We made a transcript of the excerpts related to the movie but you are able to download or listen to the full podcast via their website (stars around the 26:00 mark). The excerpts are spoiler-ish so be a aware of this before reading them. The movie will be released on March 2, 2018 and the first test screenings are being held these past few months. As we previously reported, 1iota is hosting advance (test) screenings. The next one is next week in West Hollywood. For more information head to 1iota.com and we will try to inform you of the latest screenings on our twitter feed.

Q: Let’s go back to your latest movie that you’ve said you just saw it, “Game Night”, due out next year. Who’s in it? Jason Bateman and Rachel McAdams? That’s an awesome duo.
A: By the way, the cast is – I don’t know if you guys are big TV fans, I’m sure you are – but the cast is dope. It’s Kyle Chandler, it’s Jesse Plemons. It’s homeboy who’s Dexter, Michael C. Hall. He plays the bad guy. What’s the guy from Westworld? Jeffrey Wright. It’s crazy. It’s got all these legitimate actors.

What’s cool about it, and when I wrote it, I wanted it to be not just a comedy but a murder mystery. You know, the premise is, you know a bunch of [people playing game night]. This is the one thing, you always have to come up with something everything relates to like bad moms or hangover. So I was like, everybody plays game night. Couples get together [to play games]. I’m like, what’s the hook of it? What if a rich brother came into town and upstaged your game night and did a murder mystery night. But then you come to find out that the brother is being chased by the mob and a real murder happens but nobody playing knows they think it’s a game until halfway through. And what the cool thing is, what the directors did, I saw it last night. They play it really dark and real and people get shot and sometimes it’s fake and sometimes it’s real. So you never really know. So the audience is laughing but also their big note was, ‘unexpected’. Which I think especially with movies nowadays, especially with comedies is everybody seen them all. Every comedy that comes out, I’m like I have seen that.

Q: It really is, people keep recycling the same kind of jokes and sticks.
A: Totally, and by the way the same trailer. You go, ‘oh I have seen that trailer’; the ugly guy with the out of his league girl and I’m like, I have seen that a billion times and I have probably written that script fourteen times. But to do this, and you know it’s funny because Warner Bros is battling now how to sell it. Because it’s got all these stars in it and you can imagine the poster being all these jammed in together making funny faces and you see that movie. But it’s also dark so then there is another poster I saw where it was like, you know a gun and it says ‘Game Night’ and the gun was build out of game pieces. And I was like, dude that is so cool. If I was seeing that [latter poster], I would be like that’s so interesting. I hope they will go that way. They play it like a thriller but then a comedy and I don’t want to compare it to “Get Out”, which I loved, but I feel like those kind of movies – like “Baby Driver”, “Get Out” … – they are weird and I meant that in the best way. And I think that’s what audience are looking for nowadays. Something different to get you out of your house. It was exciting to see, and to have my name on a movie is such a blessing and people laughing and having a good time was unbelievable. I’m hoping for the best for this one. And it ends with almost a part two hopeful because I always keep my fingers crossed, maybe they will pay me to write another [laughs].

Q: I noticed you said that the note that you were getting about “Game Night” was unexpected and I have to tell you, that really intrigues me.
It takes balls to do something new. Imagine you are doing this, you are making [a movie], the guys [directors] did all this cool stuf, they shot it in this in a cool way and comedy people they go it’s cookie-cutter how you shot a comedy and New line has done a lot of them and I’m giving them credit for letting these guys do something different. And the reason the idea works, is because you don’t know who’s in the game and who isn’t. So throughout the movie, people are getting killed. Some are part of the game they are actors and some are really getting shot. You are not sure who is or isn’t and you are never really sure when the game is over. It’s kind of reminisce of Sean Penn movie back in the day, it might have been called “The Game”.

I’m not comparing it to “Get Out”, but it had that vibe of you weren’t sure – and I knew it because I wrote it and I know I what was going to happen – what you see because it looked real. You know what the cool part is too, you didn’t get comedians but got real actors to play it. So when people get shot, so these guys, these real legit Emmy winning actors do it, you feel it. And that’s why I think Jason Bateman and Rachel McAdams become funnier in a weird way.

[…] By the way, you are going to love “Game Night” because it’s couples competing and stuff. It’s interesting because the opening at the start shows their [Bateman & McAdams] love affair throughout them being married through the games. How they met at the game night and it was really clever how the directors did it. And by the way, when they get told these rules they get ultra competitive and that’s the truth. And Bateman’s [character] goes deep and wants to win, he wants to win from his brother. You have all the types [of personalities being competitive].

Q: Has it been released yet when it’s coming out?
A: March 2nd, 2018. It was February 14 but Black Panter was on that weekend so they [studio] got spooked. They were saying it was a massive juggernauts so hopefully two weeks after [Black Panter] people will come and want to see a comedy.