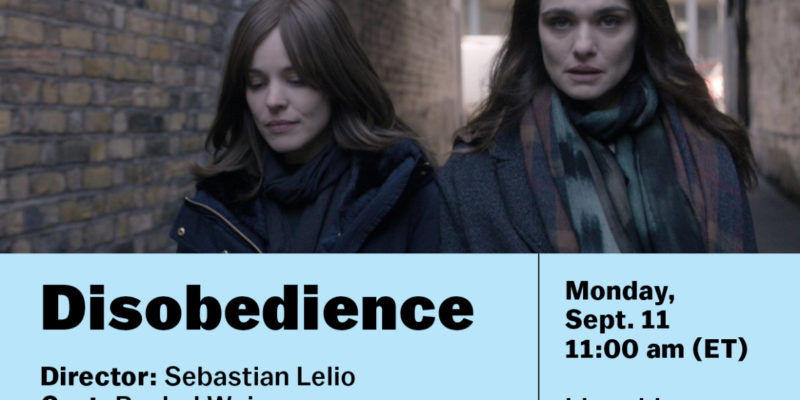 Deadline is hosting Cocktails & Conversation panel series at the Toronto Film Festival and they are reporting they will host a panel on Monday, September 11 at 11 AM ET for “Disobedience” with Rachel, her costars Rachel Weisz Alessandro Nivola and director Sebastián Lelio. The panel will be livestreamed, and they are reporting they will post the livestream later on. Be sure to head over to Deadline on Monday to watch the panel, and be sure to check back later on for our coverage of TIFF. “Disobedience” will have it’s world premiere on Sunday, September 10. Thanks to my good friend Amanda for the heads up!

Deadline’s Cocktails & Conversation panel series at the Toronto Film Festival continues at 11 AM ET Monday with Disobedience, the movie adaptation of Naomi Alderman’s novel about a woman who returns home to her orthodox Jewish community in London and rekindles a romance with her cousin’s wife. Sebastián Lelio directs Rachel Weisz, Rachel McAdams and Alessandro Nivola.

The film is having its world premiere Sunday in the festival’s Special Presentations section. Weisz, McAdams, Nivola and Lelio join Deadline’s AwardLine editor Joe Utichi for the conversation

Furthermore, Variety is reporting Rachel is scheduled to appear at the Variety Studio. The interviews will exclusively appear on Variety.com and their social media.

Variety Studio, presented by DirecTV and AT&T, will return to the Toronto International Film Festival, offering exclusive video interviews with stars and directors ranging from Jennifer Lawrence and George Clooney, to Matt Damon and Emma Stone.

Interviews from the studio, all presented by DirecTV and AT&T, will appear only on Variety.com and Variety social media accounts.

The private, invite-only interview lounge will be held at Momofuku Toronto — in the heart of downtown Toronto. Guests will be able to test their film knowledge and play a trivia game to benefit the Houston Food Bank.

The Toronto International Film Festival began in 1976 as a collection of films from other festivals and has since expanded to become one of the most influential fests in the world. This year’s iteration, which kicked off on Thursday, ends on Sept. 17.

Additionally, The Wrap is reporting Rachel is expected to attend the Grey Goose Rooftop, we assume for the after part of “Disobedience“.

Jessica Chastain, Benedict Cumberbatch, Michael Shannon, Rachel McAdams and Diane Kruger are amongst the names expected poolside. The host is trying to shed the festival trope of stuffy junket rooms. Instead, this rooftop complex is known for killer views above King Street West.