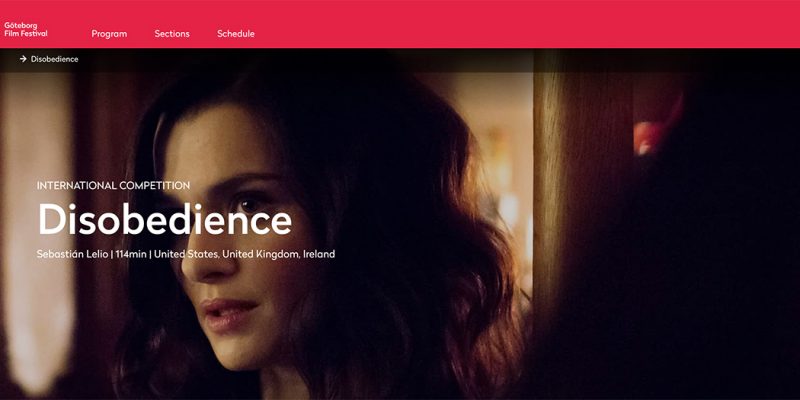 The 41st Annual Göteborg Film Festival unveiled it’s lineup earlier this week and “Disobedience” is part of it’s lineup. The movie will make it’s European premiere during the festival and it’s part of their International Competition selection. The festival runs from January 26 to February 5.

When Ronit’s father, a rabbi, dies, she heads off to London and the districts, the family and the friends she once left behind. Back home are the old best-friends Dovid and Esti, now married to each other. While Dovid prepares to assume leadership of the congregation, the deeply religious Esti and the black sheep Ronit find their way back to a forbidden flame, which might destroy everything. Disobedience is not just a film about religion and its tight reins, but above all a wonderfully humanistic story about empathy, understanding, forgiveness and about discovering and fighting for what you really believe in. And about freedom being a gift that entails loss.

Director: Sebastián Lelio
Sebastián Lelio, born in 1974 in Santiago, Chilé. He graduated from la Escuela de Cine de Chilé. His directorial credits include The Sacred Family (2005), Christmas (2009), The Year of the Tiger (2011), and Gloria (2013), the latter two of which played TIFF. His films A Fantastic Woman and Disobedience are both screening at this year’s Festival.